Lions outlast Eagles to snare a key victory, tighten their grip on the District 1-4A lead 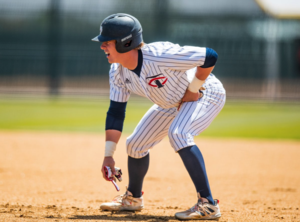 Ascending as a baseball powerhouse means Trinity Christian has gotten used to a lot of things that weren’t necessarily true in the past.

Ascending as a baseball powerhouse means Trinity Christian has gotten used to a lot of things that weren’t necessarily true in the past.

One of the biggest new realities is getting accustomed to being a team with a bull’s-eye front and center on their chests every time the Lions step on the diamond – one that is amplified against an old rival that set the same kind of standard for so long.

They did so in 8 innings, escaping with a 4-3 victory when Riley Pipes drew a two-out bases-loaded walk to score Kyle Moczygemba to allow Trinity to finally break through after the Eagles thwarted similar game-winning bids in the two previous innings.

The victory puts the Lions (20-12) at 6-0 in TAPPS District 1-4A with two games left and in prime position to nail down an outright championship with one victory against Lake Country when the teams meet at the end of the month.

This latest step in that direction took some grit and perseverance, starting with Pipes – who almost drove in the game-winning the inning before – and reliever Cayden Castillo bouncing back from a rough outing in the Thursday game vs. Lubbock Christian.

“At the end of the day, baseball is humbling,” said Pipes, who was 3-for-4 with 2 RBIs. “As soon as think you’re on top and think you are going to run somebody over, you find out that’s not quite the case.”

In this case, the Eagle (10-14, 2-4) stood tall and didn’t blink with a tone set by sophomore southpaw Conner Cross on the mound.

Trinity struck for two runs in the 1st inning with Pipes chasing one in with a base hit after Isaiah Beaver hustled around on a disjointed passed ball by Lubbock Christian.

After that, though, Cross kept the Lions frustrated for most of the ensuing 6.2 innings. The only other nick they got against him was in the 4th on Jake Nicholson’s two-out RBI knock.

There weren’t any pristine innings for Cross and the Eagles, as Trinity put at least one man on base in every at-bat. But the Lions were just 3-for-13 with runners in scoring position and 3-for-18 with a runner on base at all.

“I’m more about pitching to contact, so I’ve got to be able to pound the zone,” Cross said. “I like to be as calm and collected as possible and not let anything bother me. If a kid hits one to the fence, I’ve just got to focus on next pitch and stay in the zone.”

Never was that more vital than when the Lions twice seemed to have Cross and Lubbock Christian on the ropes.

The Eagles knotted the score 3-3 with a two-run 5th inning when Karson Leatherwood wore a pitch with the bases loaded and Bax Townsend darted home on a two-out wild pitch.

Cross wobbled a bit in the bottom of the 6th with back-to-back one-out walks and trouble intensified when Zach Smith and Ethan Pirtle executed a double steal. But Cross dug down and struck out Nicholson and the Lions came up empty when second baseman Riley Bullard sprinted to his right for a dazzling pickup and threw out Moczygemba.

In the bottom of the 7th, Cross retired Beaver but surrendered a double down the left-field line to Dayton Osborn. On the next pitch, Pipes walloped a fly ball to center field that eluded Townsend. Pipes motored to second base for back-to-back doubles, but the ball hung up long enough that Osborn couldn’t score.

Again faced with runners at second and third and one out, Cross survived again when he fanned Luis Otero and got Smith on a sharp groundout to shortstop.

“Conner has high effort and that’s important because he’s not a guy who is going to blow up radar gun, but he is going to locate very well,” Lubbock Christian coach Brandon Walker said. “We put in big-time situations last year when he was a freshman and he responded, and he has just gotten better this year.”

The Lions aren’t in the position they are in because they go quietly, though, and the 8th inning was a case of the third time being a charm.

Pirtle greeted Eagles’ reliever Jantzen Haberer by ramming a leadoff single to center field, but he was erased when Haberer field a bunt and threw a laser to second base to record the first out. Moczygemba walked and he and Nicholson both moved up on a wild pitch. Walker opted to intentionally walk Beaver to load the bases and that strategy worked on the next hitter when Osborn chopped into a 3-2 fielder’s choice.

That brought up Pipes, who patiently watched four pitches zip by out of the strike zone to end the game.

Pipes did enough to get the Lions another win, this one in an environment that had the look and feel of what the postseason will be like in a few weeks.

And that makes the performance Castillo delivered that much more meaningful.

Josh Aleman was sharp for 5 innings, striking out 7 and allowing only 6 hits. But in the 6th, the Eagles were poised to take the lead when they loaded the bases with no outs after Aleman mishandled a bunt.

Castillo came on and thwarted the Lubbock Christian rally with a strikeout, made a head’s-up play when he covered the plate on a wild pitch for an out and an infield popup.

He shut down the Eagles the next two frames as well, with Riley Schroeder’s leadoff single in the 8th the only baserunner he allowed.

“I had to not let the pressure get the best of me, trust my defense to back me up and trust my offense to get me what we needed,” Castillo said. “I just tried to take a deep breath and have fun. Once I settled in, I knew I was going to be OK.”