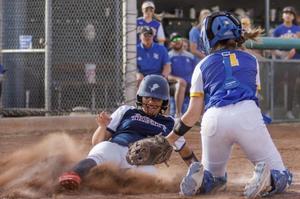 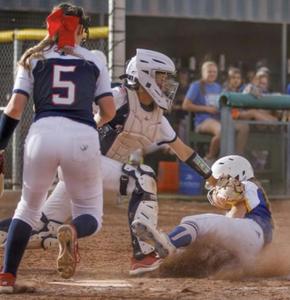 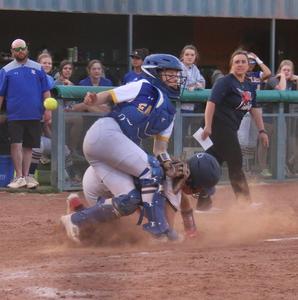 Trinity defeated the Lady Eagles 22-12 in a high-energy offensive battle, the first win in the rivalry series for first-year Lady Lions’ coach Quinn McNeely and only the second-ever Lady Lions’ win against their Hub City companions.

Round one went to Trinity Christian on Tuesday when the Lady Lions tangled with rival Lubbock Christian in TAPPS District 1-4A matchup.

And with the victory in a small three-team district comes a tight grip on the frontrunner spot.

Trinity defeated the Lady Eagles 22-12 in a high-energy offensive battle, the first win in the rivalry series for first-year Lady Lions’ coach Quinn McNeely and only the second-ever Lady Lions’ win against their Hub City companions.

“I’m kind of speechless because we came out prepared for this game knowing – that we kind of had it where our girls had the upper hand of batting, like it was going to come down to a defensive game,” McNeely said. “My girls came out performing how they needed to and it's just a really good feeling.”

The Lady Eagles were hot out of the gates, jumping out to a 3-0 lead in the bottom of the 1st inning and maintaining the lead through the first few frames.

Lubbock Christian’s Mae McKown produced one of the runs for the Lady Eagles (8-9, 2-1 district) and finished with 2 hits, 3 runs scored, and 3 RBIs.

“It's always a big rivalry between us and Lubbock Christian in general, and so I think once we kind of settled in, we played our game,” McNeely said. “I think that really changed the energy in the direction of the game because all of a sudden we realized that we are the better team in this instance, and we can hit the ball off of that pitcher for sure.

Cleanup hitter Zoe Bermea led the Lady Lions during the dominant offensive stretch, and she finished the day 5-for-5 and scored 5 runs.

“She's a freshman coming in at 15 years old and she's slinging,” McNeely said. “She had set a goal to beat Lubbock Christian, and I think she succeeded (Tuesday).”

“Also (Underwood) our catcher, she made some really cool plays, as well as some nitty-gritty slides and at home that really kind of gave us that extra energy that we needed to push through.”

“I feel like I did pretty good, but you can always do better, and you always want to play hard for your team,” Fortner said. “But I feel like we all just gave it our best and now we know what we need to work on and we’re going to push through to the next game.”

During those dominant innings for Trinity Christian, the Lady Eagles kept pushing runs across as well. After being down 21-6 in the top of the 5th, they rallied to close the gap to 21-12 heading into the 6th.

The highlight was when Lubbock Christian center fielder Emily Galbraith strode to the plate the two on and two outs and slapped a three-run home run to center field.

Ultimately, the Lady Eagles’ run was not enough to avoid the game ending early because of the run rule, resulting in a rare Trinity win between the two foes.

“I think that this was a big confidence boost,” McNeely said. “Coming in as the underdog, with our history not always being on the winning side of Lubbock Christian, this should give us exactly what we need to double them over.”

The two teams face each other again on April 23 at Lubbock-Cooper with the Lady Lions poised for a season sweep.