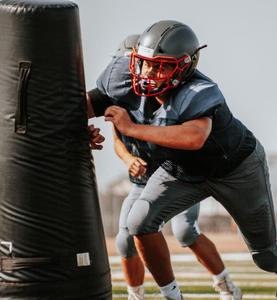 We are so incredibly proud of Evan and how hard he has worked to get back out on the field this year after last years shoulder injury. Words can’t even describe how much we love Coach Kevin Spiller and his incredible TCS coaching staff! Go Lions!!

Missing from that multi-layered equation was one of the Lions’ best players, which makes Trinity’s oh-so-close final two games that much more impressive.

With the transition in the rearview mirror, senior lineman Evan Madsen is back in the fold -- recovered from a shoulder surgery that knocked him out of the 2019 campaign when first-year coach Kevin Spiller made his initial stamp on the program and the school.

Madsen will start at right offensive tackle in Spiller’s run-based offensive scheme and also line up as the left defensive end for a defense that will be the heart and soul of the Lions’ aspirations this fall.

To say Madsen is glad to be back blazes quickly past the understatement category.

“We’re all excited because we’re ready to start a new season, but there’s a different level of excitement. We’re all familiar with the coaches now and guys have embraced the style Coach Spiller brought with him.”

It’s not hard to deduce why Madsen is amped up for his senior season, besides the understandable eagerness stirred up when at athlete misses an entire campaign.

Spiller’s grind-it-out offense places a huge premium on how the offensive line executes. In his first season, the Lions churned out 270.8 rushing yards a game.

Replacing running back Justin Franco and the two quarterbacks who ran the show last season, Roman Holt and Kayl Ratliff, will be a challenge. But inserting Madsen into the mix up front certainly balances out that chore.

Especially when you consider how much gusto he brings to the role and his fellow linemen have to play.

“We have a lot of people pulling and down-blocking so it’s really just about getting the defensive linemen off the line so we can open gaps so our running backs can get through and get a couple of yards on every play,” Madsen said. “We bought into the offense Coach Spillers runs and we’ve learned it. It’s definitely different than what you see from most teams, but it works. We love working together and making this offense click.”

Added Spiller, “In our system it’s easy to get offensive linemen to buy in because it’s a system that focuses on them quite a bit. A lot of our offense is dictated by what our offensive line is capable of doing, and that gets them excited to prepare.”

Madsen’s prep time required much more studying and observing than he would’ve preferred, but he intends to turn the time he missed into a positive.

“With what he went through last year, it gives him even more determination,” Spiller said. “Once we were able to get back to work (last spring and summer), he was always there front-and-center and leading by example. He’s just exactly what you want in a team leader.”

Those sentiments exist on a two-way street.

One of a handful of Trinity players who have been at the school since pre-K, Madsen has had a front-row seat to the football program’s evolution. While there has always been interest among the student body, Madsen said Spiller’s arrival -- and more importantly the top-shelf expectations he shared with the players on Day 1 -- have spurred more passion and enthusiasm than ever.

One barometer of that is how quickly the junior high program has grown. When Madsen was that age, he said Trinity might have 20 players when the season began. Now there are around 50 players and the junior high is fielding two teams.

“Since Coach Spiller got here, there has definitely been a new level of excitement about football throughout the school,” Madsen said. “He came in and said ‘I want to win a state championship. He didn’t act like we were rebuilding or had a long way to go. He showed a lot of confidence in us from the first time we met him and that’s been incredible.”

The Lions came within a yard of stunning cross-town rival Lubbock Christian in the regular-season finale, losing 32-27 in the inaugural game at their own stadium. The Eagles went on to play for the TAPPS Division III state championship. Then in the first round of the playoffs, Trinity stood toe-to-toe with perennial championship contender Colleyville Covenant before falling 52-42.

The memory impact of those two games was a launching pad into the offseason because there wasn’t much mystery about how close the Lions were to a pair of top-notch opponents.

“Pushing Lubbock Christian that hard and then having a chance in our playoff game showed us we can do it,” Madsen said.

“We were right there and there is a lot of excitement that we were so close. Now we have added a couple of new pieces that make us confident we can go all the way. We’re as prepared as we have ever been.”

And part of that preparation and elevated confidence is tied to Madsen being back in the thick of things for one final run.

“Getting Evan back is a big boost to all of us,” Spiller said. “As much as anything, we’re happy for him because of how hard he has worked and what he has meant to the football team and the school.”